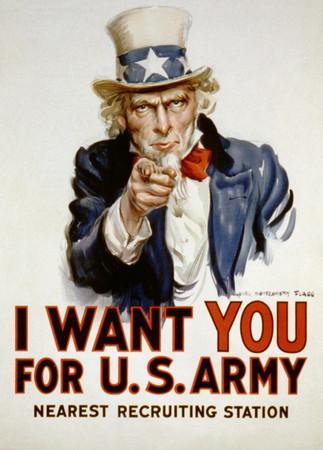 Joining the military has not always been voluntary. During times of war, the United States has had to draft men into serving in the armed forces. This type of recruitment is referred to as conscription. Along with conscription, the United States as also taken extreme measures to ensure that young men enlisted in the army, including campaigns and demonstrations. During both World War I and World War II, the United States not only instated the draft, but they also began a huge campaign for the U.S military, emphasizing patriotism, jobs/careers, adventure/challenge, social status, and travel. The combination proved successful, turning the act of joining the military and fighting for one’s country into one of the most patriotic, adventurous things a U.S citizen could do.

Today, the Army has a slightly less hands on method regarding recruitment. While they do have media campaign advertising careers in the military, they do not have the same emphasis on it as they once did. Today, the military is seen more as a career option rather than a mandatory duty. Its main strategy has been to emphasize the benefits that come with the armed forces, such as education payment plans and healthcare.

According to military.com, joining the military can be boiled down to ten simplified steps.

The ROTC, or Reserve Officer’s Training Corps, is a college and sometimes high school-based, officer commissioning program. It’s designed as a high school or college elective, offered only at certain schools. The course itself focuses on teaching the skills and qualities necessary to becoming an officer of the armed forces. The qualities include leadership development, problem solving, strategic planning, and professional ethics. All branches of the military offer ROTC programs, including the Army, Navy, Marine Corps, National Guard, and Air Force. The only branch that does not offer ROTC courses is the U.S Coast Guard. The largest of the ROTC programs belongs to the Army, which constitutes approximately 59% of all ROTC graduates. The smallest program belongs to the Marine Corps, which constitutes only 11% of ROTC graduates.

The ROTC as several benefits, including a number of merit-based scholarships available to those who excel in their coursework and exemplify the qualities of an American soldier. These scholarships can cover either the full or partial cost of tuition for whatever school an ROTC participant wishes to join. In exchange for paid tuition, ROTC students agree to a certain amount of military service after their schooling has been completed. ROTC programs are available at three different levels: through military colleges (there are six in the United States), through civilian colleges (regular colleges and universities), and military junior colleges.

ROTC programs have come under fire, though, for supposedly withholding certain information from those wishing to join the armed forces. Students often complain about not knowing about the full extent of their commitment to the military when they agree to join the ROTC. LGBT groups have also protested against ROTC groups under the allegations that they discriminate against homosexuals on the grounds of the military’s “Don’t ask don’t tell” policy, which was eliminated in September of 2011.

The armed forces have a set of eligibility requirements that are enforced when joining the military. While enlisting members do not need to have hands on experience in the military, it is best that they have some background knowledge about military traditions as well as how the military operates. On top of this, the military requires that all enlisting citizens:

Different branches of the military have different requirements when enlisting.

Age limits for each branch vary based on active duty and prior service in the armed forces or reserves.

The United States military has a long, distinguished military history, and can be a very viable career option for those looking to make a difference or serve their country. Those looking to enlist in the United States armed forces should realize the commitment they are making upon enlisting. Researching careers in the military beforehand can be a very useful tool in choosing the right job within the military.