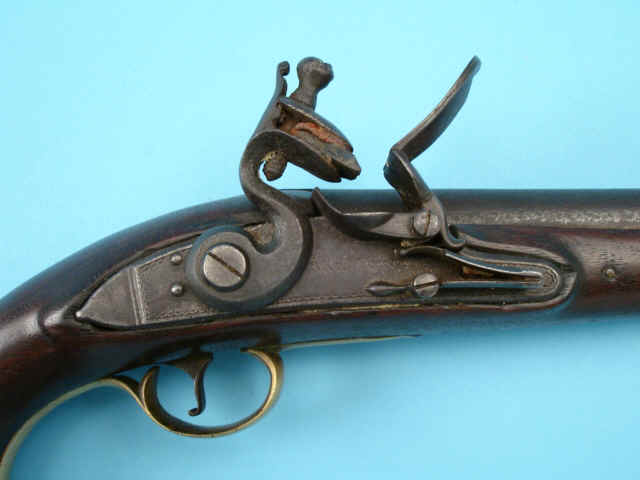 America’s first sidearm was produced at this historic Virginia landmark. A replica of the British Model 1760, the Model 1775 was a muzzle-loading .62 caliber hand cannon. Rappahannock Forge was a key manufacturing base for colonial forces during the American Revolution.

In 1775, British regulators marched on Lexington and Concord, the consequence of which was the “shot heard ’round the world.” It was here, on the Rappahannock River, that 80,000 muskets were made during the Revolution.

At the time, there were few gun makers in the Colonies; most of the renowned gunsmiths were located in Pennsylvania. Oddly, Pennsylvania rifles were called “Kentuckies” and the majority of them were produced at the Rappahannock base which also served as an arsenal during the war.

Due to the scarcity of firearms, military units had to assemble them from a mixed bag of parts, some from England and others from France with hardware from Britain, France and Germany. Some parts were even made from scratch by handy infantrymen.

To deal with the precariousness of their situation, Committees of Safety were formed to acquire guns, among other things. That’s where Hunter’s Ironworks, aka Rappahannock Forge came into play. This iron furnace located in the heart of Falmouth, VA supplied the Army and Navy with everything from swords and camp implements to muskets and other armaments.

Founded by Scottish émigré James Hunter, a merchant and planter, Hunter’s Ironworks is believed to have begun manufacturing weapons in 1776 at the height of the Revolutionary War. In May of that year, the Council of Virginia ordered 1,200 lbs of gunpowder remain in Fredericksburg with “100 pounds for proving arms at the manufactory and at Mr. Hunter’s.”

While this may be the first record of wide-scale gun manufacturing at the ironworks, James Hunter’s production of arms, for in 1826 the son of the Superintendent of manufactory penned a book in which he wrote of his father recruiting skilled workmen to produce guns “shortly after the war began” in what was, most likely, the summer of 1775.

Subsequent records show that Hunter supplied arms to the States as well as the Virginia Convention of Delegates who told the committee to order “as many good muskets, with bayonets, sheaths, and steel ramrods as he [Hunter] can manufacture within 12 months from this time, at the rate of six pounds for each stand.”

By 1777, it had become clear that Hunter was making little to no profit on the production of firearms and, worse yet, teamster’s wagons had been confiscated for military use. In a letter dated the 19th of February, Rappahannock Forge manager John Strode addressed these concerns.

In the latter half of 1780, Hunter was left with no choice but to cease production of pistols because of a lack of skilled employees, most of whom had been drafted to serve in the Army.

In November of 1781, Hunter managed to start up Rappahannock Forge anew and in April of the following year, he expressed his desire to make and repair firearms, but operations at the base came to a final halt the same year due to the lack of attention given to the re-established ironworks. Hunter terminated his workmen and closed up shop.

Sidearms came a long way in the ensuing years; after the Revolution, a Connecticut gun maker by the name of Simeon North was contracted to manufacture a new pistol. Based on the French pistols of the time, this new firearm was more compact than the 1775 model with a side-mounted ramrod and expelled a bigger .72-caliber ball.

As time went on, it became clear that smaller sidearms were advantageous to infantrymen who wanted to be able to concealed their weapon in more compact and comfortable holsters. Additionally, soldiers found that they needed an effective, large caliber defensive pistol for increasingly volatile combat conditions.

In the late-1800s two new armament technologies were being developed, namely auto-loading pistols and smokeless powder. In 1906, the US military started evaluating a number of pistol designs along with the suitability of a new cartridge designed for the .45 ACP (Automatic Colt Pistol).

The Colt pistol submitted for military testing was that of visionary gun designer John M. Browning. Based on the short recoil principle of operation, Browning’s design was a magazine-fed single action semi-automatic pistol with dual manual and grip safeties.

The durability, reliability and austerity of the design was unparalleled by other pistols of the period. The Browning model was officially adopted by the Army on March 29th, 1911, hence the pistol’s name. The best 1911s on the market today retain this rugged durability and simplicity.

So many 1911s have been pressed into service that the US Army is now preparing to transfer more than 8,000 surplus M1911 handguns for civilian sale this year. Last year’s National Defense Authorization Act contains a section that explains how the iconic pistols can be transferred to the entity that oversees the Civilian Marksmanship Program, a government program that permits eligible civilians to buy surplus military weapons.

Spare parts and pistol accessories will also be made available to the Corporation for the Promotion of Rifle Practice and Firearms Safety as part of the two-year pilot program. The 1911 was replaced in 1985 by the Beretta M9 and is being replaced, in turn, by Sig Sauer’s P320.

The P320 boasts a modular design and can be chambered in 9x19mm Parabellum, .357 SIG, .40 S&W and .45 ACP. Like the 1911, it is based on the short recoil principle of operation. It utilizes a striker-fired mechanism in lieu of a double action only hammer system. Sig Sauer offers a wide array of variants including full-size, carry, compact and subcompact.

Although military sidearms have evolved in the last century, few hold a place in antiquity like that held by Rappahannock Forge’s Model 1775. Their signature flintlock pistols sell for as much as $75,000 at online auctions. Their handsome walnut finish and ornate hammer design reflect the art form that was yesteryear’s firearms.