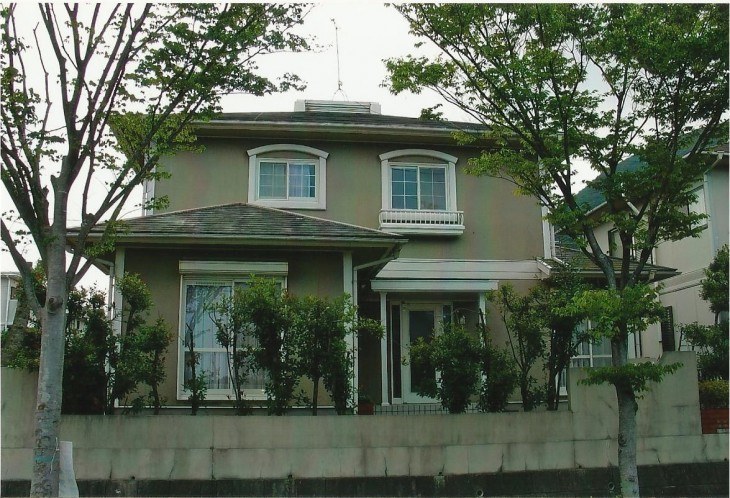 I peeked out the kitchen window to spy the three men standing outside my house as they savored the last few puffs on their cigarettes. The truck they pulled up in dwarfed the narrow street, and I wondered if my neighbors were peeking out their own windows to see what all the commotion was about. I checked my watch. They were eight minutes early. And as the men stubbed out their cigarettes and walked to my front door, I prayed that when they opened the doors of that truck, I would find the precious contents unharmed and intact.

“Ohaiyo Gozaimasu” I said and bowed my head. My household goods had arrived in Japan. It was moving day.

I had no idea what to expect when my husband received orders to Japan. I had never left the United States before, never used a passport. But here I was, not just visiting a foreign country, but moving to one. For three years. I couldn’t speak or read the language. I didn’t know the proper etiquette or customs. I couldn’t drive a car on the left-hand side of the road. I was basically a very conspicuous, taller than average, blonde-haired, blue-eyed American woman who stood out like a sore thumb.

When my husband and I arrived in Japan, we knew we would be temporarily homeless. The waiting list for on-base housing was a mile long, and our prospects for off-base housing were limited because we couldn’t exactly pass off our 90-pound Labrador retriever as a “small pet.” So we waited out our jet lag in the lodging on base while I attended an indoctrination class to learn up on the language and etiquette and driving skills I was lacking.

I also spent my days at the housing office, scouring the board of listings for cho houses and meeting realtors to give me tours of the off-base Japanese homes I had chosen. Finally, after a month of living out of suitcases, we found the house for us. I couldn’t wait to sleep in my own bed again and see all of my possessions that had been boxed up months earlier. I tried to replace the anxiety I felt toward living off base in a foreign country with a sense of adventure. But that anxiety bubbled back up to the surface once the movers showed up at my doorstep. Their presence made our move into a house “on the economy” official.

Only one of the three movers spoke English, and his grasp on the language was shaky. Because we could barely speak to each other, we spent the day pantomiming and gesticulating. However, it was clear that he had worked with Americans before. If he pointed to the couch that sat on the sidewalk, then I pointed to a particular wall in a particular room, and he in turn translated in Japanese to his co-workers. By the end of the day, we had a pretty good system going.

I was pleasantly surprised by how quickly these men moved us into the house, especially considering that every time they entered the front door, they carefully removed their shoes and kicked them aside. Imagine holding one end of the largest piece of furniture you own and transporting it with a partner from one end of your house to another. Would you want to stop and take off your shoes? I’m guessing no. But these men did just that, with every box and every piece of oversized American furniture, they stopped and took off their shoes.

And speaking of oversized American furniture, I think my new friends almost had a heart attack when they attempted to carry our dresser upstairs to the master bedroom. This dresser was long and wide and, even with the drawers taken out, felt like it weighed about 200 pounds. I watched these shoe-less men attempt to maneuver it up the stairs and pivot around sharp corners, and I held my breath in hopes that neither my dresser nor the walls of the house would be permanently scarred by our stupidity for not putting our most obnoxious piece of furniture in storage instead of having it shipped halfway across the world. In the end, there was nothing left to do but give up. That dresser never made it up the stairs to our bedroom. Instead, it fit perfectly on the back wall of our kitchen, where it stored canned goods and linens.

Other than having to apologize for our large furniture, the move was painless. I learned in my 2-week indoctrination class that tipping is considered an insult in Japan. But I also learned through word of mouth that the Japanese will never take offense when offered a gift of American pizza and beer. After accepting my on-base food court offerings with a bow, they piled into their now barren truck and drove away, leaving me alone in this newly Americanized Japanese home.

For 4 short months I loved that house in Tanagata-cho. But when we got the phone call notifying us that our names had finally inched up to the top of the base housing list, I couldn’t pass it up. I wanted to live on base where I didn’t feel so isolated, where I could be a part of a community of families who shared certain commonalities that included speaking the same language. Within days of making the decision to leave our cho house and end our big adventure of experiencing Japanese culture firsthand, the movers were back at my front door, including that one man who spoke English and seemed to remember me because of my kitchen dresser.

Two years and 8 months later, we PCS’ed back to the States. After moving out of the cho, we moved in and out of two houses on base, traded in our Daihatsu Naked for a Toyota Spacio, and bid farewell to that Labrador retriever shortly after welcoming a baby girl into our family. And while I loved living on base and forming unbreakable friendships, I’ve never quite forgotten that amazing house in Tanagato-cho that taught me more about Japanese culture than any indoctrination class could. I can still smell the tatami mats. I can still remember washing my hands in the little sink on top of the commode. I can still remember showering before soaking in that deep bathtub because Japanese families share their bath water. I still insist upon removing my shoes whenever entering a house. And yes, whenever I look at that oversized dresser that now lives in our guest bedroom and stores seasonal clothes, I remember how I laughed every time I removed a can of soup from one of its drawers.

Shortly before our family left Japan, we took one last trip down memory lane that led us to our house in Tanagata-cho. We parked in the street, silently wondering about the American family who now lived there and the memories they were making inside our old house. And as we drove away to return to our final night in the hotel in which we once lived before our life in Japan began, I thought about the role that house played in my introduction to the wondrous adventures military life can offer.