The US Marines Corps have recently started to receive a new weapon, the M27 Infantry Automatic Rifle. There have been calls for such a weapon for many years, which is designed to replace the M249 Light Machine Gun. [1]

Today, we’ll take a look at why the new weapon is needed, and some of the design features that make it stand out. I’ll then give some thoughts on how the new weapon is likely to change the civilian gun market. 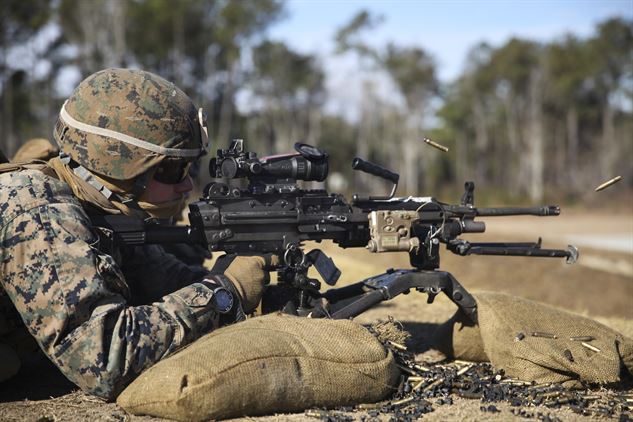 The M27 is replacing the M249, which in itself is a great weapon. First put into service in 1985, in a joint decision between the Marine Corps and the US Army, the M249 has performed extremely well since then. It is belt-fed, and is able to produce a huge volume of fire, though skeptics question whether the increase in fire rate is worth the upgrade, suggesting that time would be better invested in developing stronger coating techniques.

However, the conflicts that the US got itself into during the 1990s were increasingly urban in nature, and it quickly became apparent that having a pretty heavy, belt-fed machine gun was more of a burden than a blessing. Carrying heavy ammunition belts around cities is not that easy, and – worse – the enemy was able to quickly identify soldiers carrying the M249, and target them.

The design specifications for the new weapon were therefore quite specific. It had to be more portable than the light machine gun it was replacing, and also look similar to other weapons carried by the US Marines. It also had to be chambered in the 5.56mm round, in order that the same ammunition could be used by all members of the combat team.

Several manufacturers submitted designs according to this specification, but ultimately it was the Heckler and Koch HK 416 that won out. In December 2009, this weapon began an extensive period of testing.

During initial trials, many were concerned that the magazine-fed HK 416 would never be able to match the rate of fire of the belt-fed M249. In the end, however, the enhanced portability of the new gun, and the fact that it was far more accurate than its predecessor, won it converts among the troops testing it.

Like the AR-15 before it, I fully expect that the M27 will spawn many civilian copies in years to come. It’s worth, therefore, looking at a few key features of the M27 to see what kind of civilian rifles we’ll be using in the future.

The first and most obvious point to make is that the rifle uses the 5.56mm round, which is a little smaller than the 7.62mm used up until now for many military rifles. While some in the civilian gun community might feel that this limits their firepower, don’t be fooled – modern 5.56mm rounds are plenty powerful enough for hunting, and you should make sure you wear adequate, OSHA-certified protection when firing them.

The second feature of the M27 that I’d be happy to see translated into civilian weapons is the “gas-piston” system. In current Ar-15 variants, the hot gases generated by fired rounds are vented inside the weapon, which can lead to corrosion. In contrast, the M27 uses these gases to drive a piston, which  cycles the weapon, and then vents them outside the gun.

If the positive reviews I am hearing from serving soldiers are anything to go by, I can’t wait to get my hands on the inevitable civilian version of the M27.